After a great night out in Deadwood, we packed up and hit the road again, making our way to Mount Rushmore, Crazy Horse and finally camping in Badlands National Park.

First stop of the day, we visited the Crazy Horse Memorial in South Dakota. The monument has been in progress since 1948, if completed as designed, it will be worlds tallest statue.

Next stop was Mount Rushmore, its strange, this place is as it looks in pictures – but not in a disappointing way.

There is a main viewpoint, which is a struggle to try and get pictures from, however, there is a small trail that takes you closer – you are looking up from this viewpoint but its interesting to see Mount Rushmore from various angles.

When we finally arrived at Badlands National Park, we had a quick stop at a view point before heading to set up the campsite. The plan was that we would be back to do a hike, however, this wasn’t how things ended up turning out…..

We found our campsite and got everything set up, our leader managed to make a shelter for us to set up dinner as there was going to be rain. RAIN IT DID…

We all got in the van to take cover, leaving everything outside. Dean decided to go and rescue the most important thing……the beer cool box.

After 15/20mins of sitting the van, we began to realise that we weren’t going to be able to camp that night. Most of the tents were looking pretty much flat by this point and everything was soaked, including us. Our leader was trying to arrange a nearby motel for everyone. Eventually, she turned to us all and said if we were going to finish this trip, we needed to go back out and pack everything up. We managed to retrieve everything (some things in worst states than others, a lot of things got ruined). As we were driving away the sky was a weird apocalyptic yellow colour, the most strange experience ever.

A couple of us helped clear out the van before having a shower and going to sleep. On the plus side, it was quite nice to have a warm bed for the night. We decided to change our itinerary a little by not hiking in Badlands, instead we headed to 1880s town as planned and then drove much closer to Chicago.

1880s town is a museum that you can freely walk around at your own pace and explore all the different things they have on site. There are more than 30 authentically furnished buildings. You can even get dressed up, but we had arrived there before this part was open. But we all had fun exploring the buildings. I find it so interesting seeing how people used to live.

I’m Off To America For 6 Weeks! 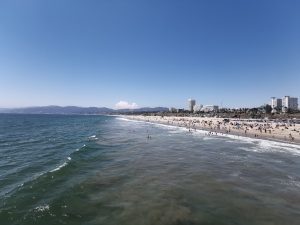